An economist/public policy adviser and a financial journalist envision a transformative resurgence in industrial regions that had threatened to rust from within. Van Agtmael and Bakker find hope where others have seen decades of decline, as cities from Akron to Dresden have awakened from industrial obsolescence. “That’s because, like the fairy-tale Sleeping Beauty,” write the authors, “they have lain dormant for a long time—doomed to a state of inertia by the evil witches of policy or (lack of) leadership or faulty analysis—and have been given up for lost by entrepreneurs and investors.” Continuing with the fairy-tale motif that (thankfully) doesn’t pervade the rest of the book, they write, “the awakening beauty develops new capabilities, particularly the ability to adapt to new circumstances and to refocus its energy on new areas of activity.” No, the old jobs are never coming back, and the old factories will billow their smoke no more, but there are now collaborations between corporations and universities, an embrace of technology, and a shift from the primacy of a traditional liberal arts degree toward “vocational training, which…had almost disappeared, especially in the United States.” All of these changes have accompanied a global shift in emphasis from cheap labor and products toward “making things as smart as possible,” with quality and ingenuity. van Agtmael was principle founder of Emerging Markets Management, and Bakker is a Dutch journalist and editor specializing in financial affairs. Though the former, also born in the Netherlands, has lived in the U.S. since 1968, the perspective here on the transformation of “rustbelts” into “brainbelts” has an outsider’s freshness toward America and an international expansiveness. The authors acknowledge areas of concern, such as monopolization and loss of privacy from consolidated data, but they suggest that the rewards far outweigh the risks. Akron glitters like never before in these illuminating pages. 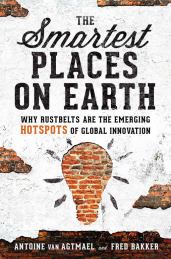